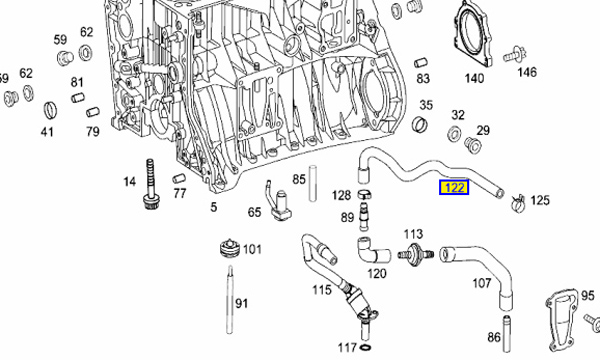 A quite common problem of the Mercedes M271 engine range concerns part of the partial load ventilation. These engines were excellent in the classes: C, CL, CLC, CLK, E and SLK. A complete list can be found here. At first I suspected to be affected. The OBD-error ‘P2029’ caused me to do some more research. According to reports the defect already occurred with some vehicles at 40´000 km. Others however never had problems with it.

The crankcase of the engine is pressurized by blow-by gases from the combustion chamber and the high temperatures. These overpressure gases, which consist of partly unburned exhaust gases, oil particles and fuel residues, cannot of course simply enter the environment unfiltered. This is why there is an overpressure channel from the crankcase to the intake bridge so that the gases can be burned. Now it is the case that there is a high vacuum in the intake tract during partial load and thrust operation of the engine. The gases can now be sucked out of the crankcase and burned via the partial load ventilation.

In some first series Smarts of ForTwo´s the partial load relief valve was suspected to be responsible for defects and damages to the engines. On the Mercedes M271 engines, however, it was not so much the valve as a hose that became brittle and cracked over time due to the high temperatures and emulsion deposits. This hose is now available in the fourth version.

If the partial load ventilation hose tears or leaks, oil vapours and gases enter the engine compartment and the sludge settles on the compressor. On the pressure side of the intake track, the compressor can no longer produce compression under load and the result is massive loss of performance. The OBD error “P2029” may indicate this problem. You can also read a lot about the fluctuating engine speed at a standstill and the lighting of the engine control light (MIL-Malfunction Indicator Light). To be tested with a standard OBD scanner.

The affected hose runs under the air filter box, which unfortunately makes it quite difficult to diagnose the defect. With a little trick on the other hand, at least the leakage can be detected.

Watch your step! Brake cleaner is highly flammable and can lead to severe burns if handled incorrectly. Defects on engine parts are not excluded!

According to forum reports, the repair in a Mercedes workshop will be completed in less than two hours. However, if you want to do it yourself, I recommend this manual from a user who, together with the replacement of the partial load ventilation hose, also does all the obvious work on the engine.

Apart from that I found a great manual at www.mbworld.org . Link to it here.

With me the OBD error had not returned after the deletion also after some kilometers any more. Either the error was already corrected by the previous owner and not deleted, or a short malfunction caused the OBD error. But the MIL was not active at any time.

The error seems to occur frequently in the above series with the M271 engine, but is not a capital loss, but should be checked at purchase and above all be kept in mind.