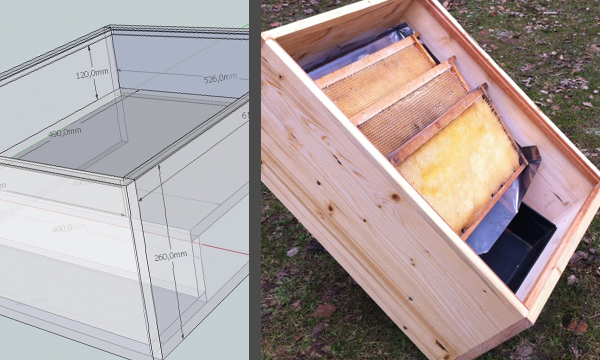 Build Your Own Sun Wax Melter

After various attempts to melt old honeycomb remains over boiling water and a miserable yield, the need for a real wax melter was not far away. The price range of various models currently ranges from 140€ for the simplest models to well over 1000€, depending on equipment, size and efficiency.

Unfortunately, research into a ‘simpler’ model for almost three honeycombs revealed that for many people quality and price levels did not match, which would have meant reaching into the next higher price segment.

With my current target number of peoples, I assume that one device is sufficient for three to four honeycombs.

In principle, a simple solar wax melter is only a box-shaped ‘cold frame’ or ‘mini-greenhouse’ in which heat deposited by the sun accumulates and melts the wax in the honeycombs from approx. 65°C onwards. The wax is then melted in the honeycomb.

Plans for self-made solar wax melts can be found, but unfortunately not all are well documented. Therefore I designed my own plan based on some pictures. Some 18mm glued wood panels were still present in the house – the usual DIY store thickness. Here are the required wood dimensions for the box based on the Google SketchUp drawing (Download).

The cover is a 4mm double web or twin-wall sheet at a m² price of 13.44€ (heat resistant up to 120°C) from the DIY store. I did without a hinge for the lid for the sake of simplicity. The twin-wall sheet must be removed as a whole. It has to be considered that the PVC is scratch-sensitive and the edges should be protected from deformation, otherwise the seat in the rebate is endangered.

The inner tub is made of a 0.5 mm thick stainless steel plate, which unfortunately could not be processed very well contrary to my expectations. It was intended to form a tub, which unfortunately failed miserably due to a lack of tools and metalworking knowledge, as can be seen in the result. In the future I will have to look for an alternative.

The total investments for me amounted to 23.62€. If the wood remnants had been newly sharpened, I would estimate at 45.00€.

Supplement after one year of use

The sun wax melter has done a great job so far. IdR. I filled it in the morning and leaned it against the house wall facing west. So in the evening 3-4 honeycombs were clean. As a small optimization I have replaced the bread baking form from metal by a silicone form. The melted wax can now be removed without a trace – an enormous plus in handling.