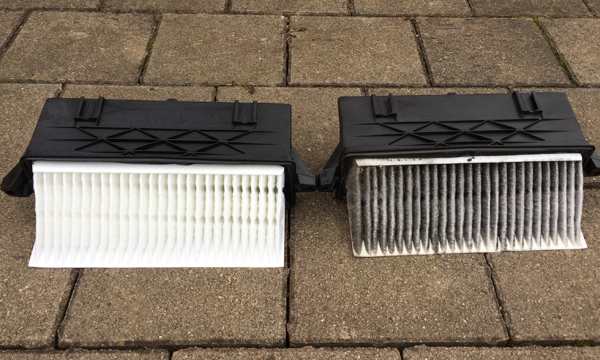 When I went through the service papers of my car a few days ago, I noticed that only at 80´000 km a change of the engine filter was noted in the digital service booklet. With meanwhile over 190´000 km it is again so far.

Annoyingly, the 350cdi exists in the w204 assembly from 2011 in two different versions (with plate filter or cartridge filter) and my car was produced in the transition month of February when the change took place. I was offered the wrong filter in all online shops. Only the direct search for the part number, which I could read in the engine compartment, gave me the right filters as hits.

In my case there are two cartridge filters with the part numbers:

These two filters are also available as a set under the part number:

You only need two Torx screwdrivers as a tool for the changeover.

and about 10 minutes time.

Watch your step! After replacing the filters, Mercedes plans to reset the adaptation values of the HFM (hot film air quantity meter) with the Star Diagnosis. This is probably due to the fact that the engine control can get confused with the sudden change of the air transmission rate. Resetting the adaptation values informs the control unit of the air filter change and can prevent the engine control lamp from lighting up.

With my w209 CLK I also ignored this hint and had no problems with it. Let’s hope for the best.

After a short test drive I can tell that small speed fluctuations disappeared when driving with cruise control on the country road. I had been able to observe this phenomenon for about four months. If this simple solution could help, I am more than satisfied.