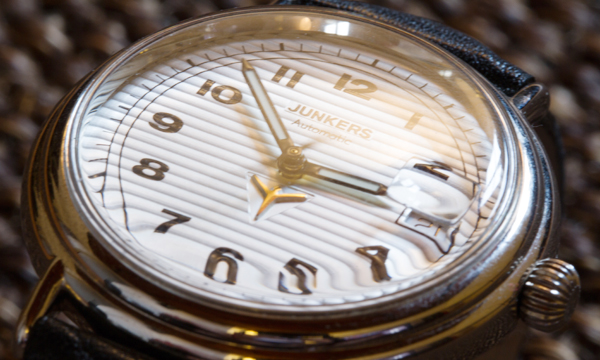 Some time ago I found an interesting Junkers automatic model in the ebay classifieds, which looked like a Junkers of the series “Wellblech Ju-52” on the not very high resolution pictures. According to the description the watch had never been worn and therefore in first class condition and the model had an additional Eta automatic drive. I agreed on the price with the seller without much negotiation and a few days later the watch arrived.

At first I was very disappointed when I opened the package. The watch was significantly smaller than a “modern” corrugated iron watch. Optically it reminded me at first more of a ladies watch. On the packing only the date of purchase was noted: 28.11.2003.

After really long research I came across the model name of a watch with the same case and dial: “Junkers 6106-1” with the difference that it was not my model with the gold-plated Eta 2824-2.

Although a serial number (1293) is noted, there is no further information about my purchased model. Not even the company Point-Tec, which manufactures the Junker watches under license, could give me more information about this model. However, a colleague said after a short sampling of the watch that he also has a watch in exactly this case. A “Maximilian 6030-1 (quartz)” also from the company Point-Tec, which he had also purchased around the turn of the millennium. Therefore it is not a ladies model but only a “normal” men’s watch from a time before the XXL madness for wristwatches.

I like to wear that little old watch very much now. It was a first-class lucky strike with a beautiful Eta caliber.