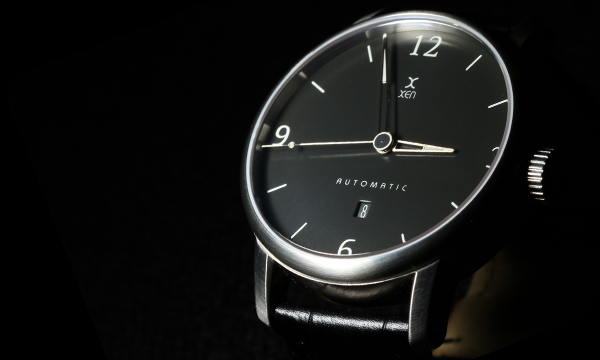 I have just received a Xen “X: Entry” XM 0003 which a member of the Uhrforum bought in mid 2014 and sold used but unworn.

The model is a modern design from the pen of Hans Gabriel Schroll with the special feature that the built-in Adolph AS2063 automatic drive shield from the 1969-1978 production period was disassembled by the manufacturer and refined with perlage, sunlight and line grinding. From a drive, which was trimmed for maximum longevity during development, it has now become a movement, which also visually releases some emotions. Classic and modern combined in one beautiful timepiece.

Compared to my ETA and Miyota automatic drives, I immediately noticed that the AS caliber doesn’t make any of the ‘rattling’ noises typical for automatic drives, starting with the rotor and the winding mechanism. A really first class manufacturing quality which is probably also responsible for the comparatively high OVP of 799€ (although the exchange value is currently significantly lower). The only thing that disturbed me visually was the hard, structured leather strap, which in my opinion doesn’t fit the overall appearance of the watch, which is why I changed it to a smooth leather strap.

Update: Unfortunately I am not satisfied with the purchased Eichmüller leather bracelet. After only about 7 months the adhesions of the bracelet came loose and that although I always wear my watches alternately and the wearing time of the Xen is one of the least. I am looking for another beautiful bracelet.

Update: Thanks for the many requests but the good piece is not for sale 😉 Seriously interested I recommend to keep an eye on the offers of the Uhrforum. There Xen watches are offered about once a month.