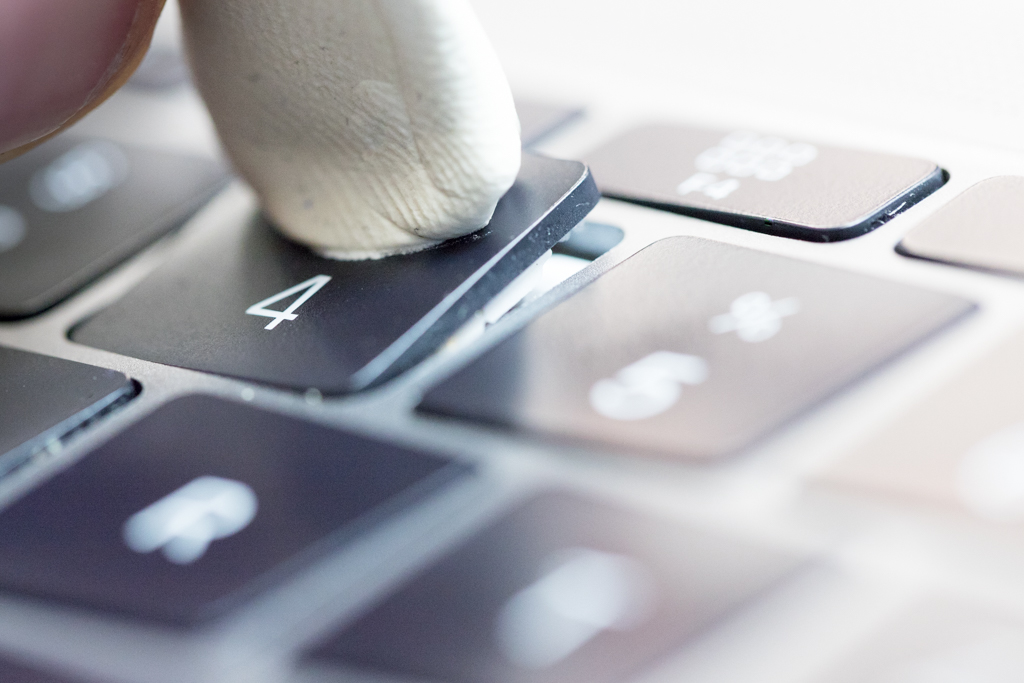 A careless moment and the juice was on and inside the keyboard. I immediately turned the device around and let the liquid run off, but there was still enough of it in the keyboard so that the keyboard didn’t recognize any keystrokes at first. The first shock died quickly when some keys reacted again. But after some time it turned out that all keys worked again but the sugar from the juice in the keys made sure that some keys just got stuck.

So how do you get the keys cleaned?

Reports on the internet describe that the butterfly keyboards of the MacBooks can’t be repaired and you have to change the whole keyboard. At least I was able to remove the normal keys and clean the mechanism underneath.

Many people use pointed objects to lever up the keys. But I was afraid to scratch the aluminium or the key with it and then I had the idea to pull the keys out with Uhu Patafix which works amazingly well if you pay attention to one important thing.

Ideally you have a spatula from an IFixit kit at hand.

Attention, I only describe my experiences here and you take the responsibility for any damage that may occur to you during the action. If you’re unsure, you’d better take the device to an Apple Repair Shop. The Butterfly keys are extremely sensitive and can be damaged.

Now it can happen that either the canopy including the butterfly mechanism loosens or only the canopy.

Only the upper part of the cap comes loose.

The cap has two clips at the top and two hooks at the bottom. First the two clips have to release at the top, then in the second step the button at the bottom can be carefully released from the hooks. First one side, then the second. You already have the cap of the key in your hand.

Once you have the cap and the mechanism in your hand, you can first loosen the two clips with a pointed object and then loosen the mechanism from the hook. Once the clips have been released, the mechanism simply slips out of the hooks. No power necessary! The order is important – you don’t want to break anything.

I placed the button and the mechanism in normal water for a few minutes and then carefully cleaned and dried them.

During this time I cleaned the trough of the button with a slightly damp cotton swab and then dried it again with a dry cotton swab.

Reinsert the butterfly mechanism on one side and carefully push it in on the other side.

Attention, the butterfly mechanism must be inserted RIGHTly around, the notch upwards and the side with the bevelled surface downwards (towards the ground).

The key can now be inserted at the bottom again (no effort required, just put it down). Then it can be pressed in at the top *click* *click*

Tip for keys where the orientation is not quite clear, e.g. the “I” and the “O” or “N”: There is a notch on the back of the key. Notches belong up!

One reads reports of the fact that the space bar cannot be solved without destruction, which is super annoying, but in my case was not necessary either.

I also had to remove some function keys but here I sweated a lot when I removed the butterfly mechanism. These things are damn filigree and feel super sensitive.

Note that the clips are on the left and the hooks are on the right. Therefore, first lift the keys to the left.

I have removed and cleaned about 15 keys and the keyboard feels normal again.