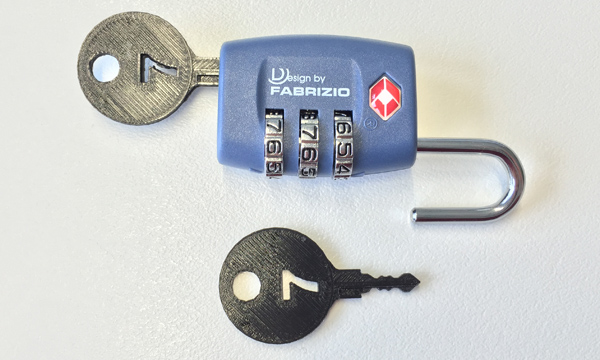 A few weeks ago I read an article on Heise that it was probably possible to create reproductions of these keys from the 3D printer based on an image of TSA keys. Of course I wanted to try it out myself and first went looking for a TSA lock and bought the first one.

TSA locks allow security personnel to open and search suspicious baggage quickly and non-destructively, e.g. at airports. The TSA locks offer security personnel a “back door” via a locking cylinder without them having to know the combination of numbers.

Apparently there are seven different TSA locking cylinders, each of which is numbered on the lock itself. My purchased lock had the number: “007”. So I could immediately download the corresponding design for my lock and start printing.

After a printing time of about 30 minutes at medium quality I already had the key in my hand. At first I had some doubts that I would get the key out of my lock undamaged. But after the gentle insertion of the key the lock could be turned without much resistance and the TSA lock was open.

Normal PLA filament thus seems to be sufficient for even this filigree key bit not to break off. No hook, no effort. The printer resolution is sufficient to make the lock look like a real key.

The 3D printing of these keys is certainly not the first attack on the TSA infrastructure is. These locks have been in circulation for over 10 years and lockpicking has become a sport. It would hardly be surprising if the scanning depth of the individual cylinders had not been known for a long time.

Personally, I would not use TSA locks on a trip and would rather buy a new lock after forcibly opening my luggage if in doubt. TSA locks have become very common and not only at airports is the number of these circulating locking systems very high. Also on a wall full of lockers that I pass every day you will find almost 10% TSA U-locks.

At a distance of several meters, TSA locks can be recognized by their logo. In addition, the number of the corresponding key is printed on the lock, which makes it even easier for the attacker to use the correct key the first time he tries. Some locks have at least one indicator that the lock has been opened. But that doesn’t provide any security either, because then the lock has already been opened.