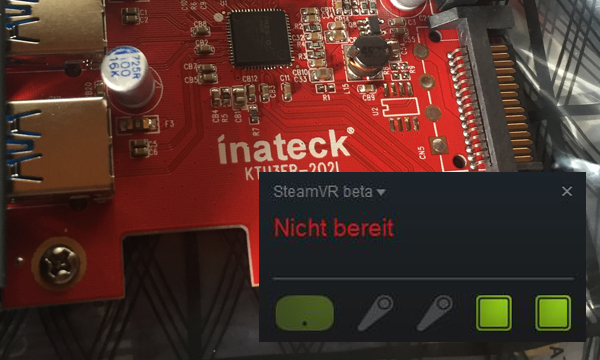 I had massive problems from the beginning to get the two controllers of the HTC Vive connected to the rest of the system. At least I’m not alone, and there’s a little workaround for this problem, but more on that later.

My unsuccessful attempts to fix the problem:

The controllers can be synchronized via USB by switching them off (stay on the menu button for a long time) and connecting them to the PC via USB until they light up green in the SteamVR. Then switch on the controller (press menu button – beep) and disconnect the USB cable. The controller now connects with a 1/4 chance. Repeat the same with the second controller. That almost always worked for me, but it was quite annoying.

On Reddit, some people reported that a special USB 3.0 PCI-E card had solved their problems with the HTC Vive: Inateck KTU3FR

Since even the HTC support couldn’t present me with a solution after three weeks and the same pointless answers, I decided to try the USB 3.0 card and Voila! It all works the way it should. The controllers now connect automatically and without problems when SteamVR starts.

I hope the map will also help you with your HTC Vive problems.