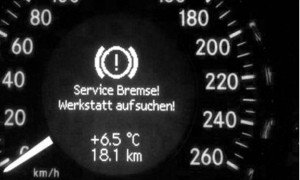 The following error messages appeared in the instrument cluster when the car was started:

In addition, no servo support was available. The braking behaviour was normal, except for the lack of ABS and ESP support.

According to initial research, this damage indicated the following components:

I was able to exclude the ABS rings, because the error message already appeared when starting the car, without the ABS ring on the axle having moved even one mm.

The sensors could have been detected via interference signals or an open circuit. I excluded a loose contact, because with restarting the car the error picture sometimes disappeared again.

The steering angle sensor, on the other hand, could have provided implausible values. Even a recalibration (steering angle left stop/right stop) did not improve the situation.

Next I replaced the brake light switch, a known problem of many error messages in connection with ABS/ESP errors in Mercedes across almost all model series.

The brake light switch is located behind the cover in the driver’s footwell (loosen three Torx screws).

To release, simply loosen the plug on the switch and unscrew the switch while holding down a small tab.

When measuring the old switch, I didn’t notice any conspicuousness. It switched normally.

The pin of the switch is designed as a rack, which automatically adapts to the brake pedal when fitted to the brake system.

Unfortunately, this exchange did not improve my symptoms either.

Several subsequent visits to various Mercedes Benz workshops unfortunately didn’t help me either. The SD short tests did not bring any errors of the sensor technology and also the SBC battery should be OK. The advice was to replace the SBC unit (parts + AWs ~2000€). At the request of a goodwill settlement, cancellations came because there was no clear damage pattern.

For me a devastating result, because before the purchase I had informed myself at Mercedes about the part number of the vehicle and had been told that the vehicle had still installed the first SBC brake, but had taken part in the obligatory ‘SCB recall’ in 2005. I shouldn’t worry, they said. However, as I had to find out afterwards, only the threshold value of the brake counter must have been increased during the recall campaign via software update. Which doesn’t solve the problem, but delays it.

But that was not my problem, because an exceeded threshold value of the brake actuations would have shown my damage permanently and not in 1/20 of all start procedures.

Too bad, Mercedes. Again an economic total loss due to electronic failure separates me from a Mercedes-Benz vehicle.