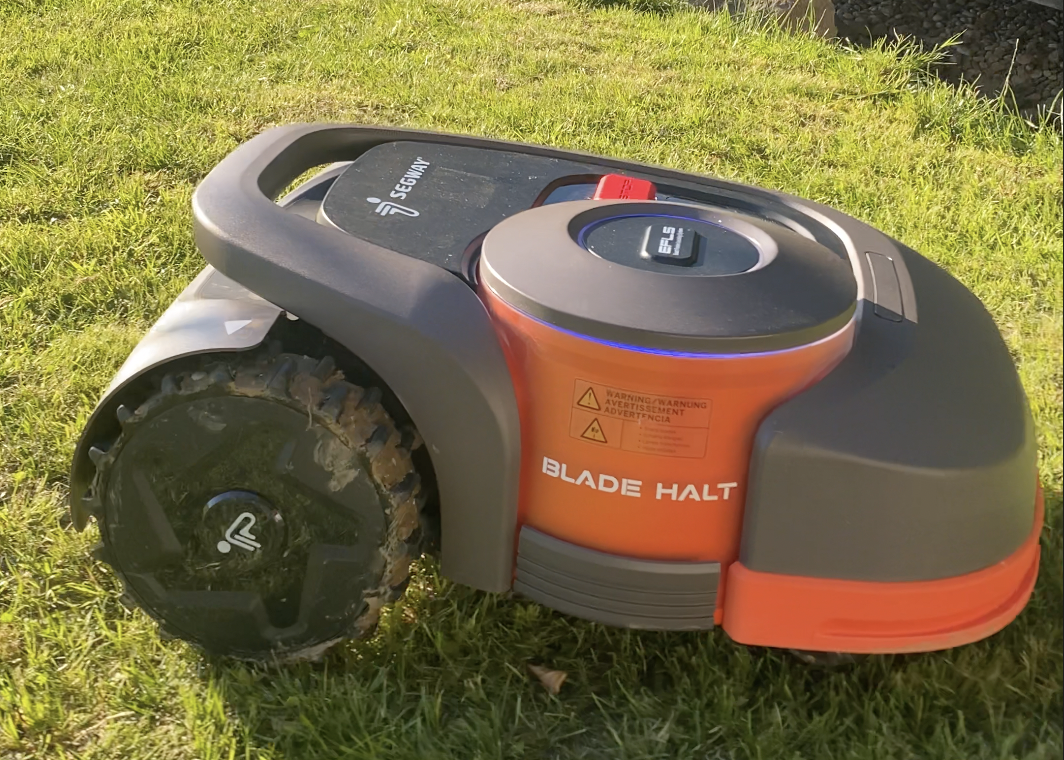 We do not yet know how we want to use our property in the future. Therefore, it is of course difficult to decide how to lay the boundary wire from our old Gardena robotic mower. In the past, it has proven to be super error prone to disconnect the boundary wire and reattach it.

That’s why it was great that we got a Segway Navimow H500e, which no longer needs a perimeter cable and relies purely on RTK, i.e. “real-time kinematic positioning”.

This way we are flexible in the future and can simply add new maps and dynamically leave grass areas to nature and let them grow.

My conclusion after the first setup of the device

But first things first. In my case, it’s already the iOS app where I simply can’t click important buttons. In my case, the app is simply not usable with the iPhone. Annoying for every user who has no alternative at hand.

On Sabine’s Android device, however, the maps can be created and saved. After each new map section, the device returns to the base station and then wants to make another test run from the new border.

However, we cannot manage to delete an existing map section. It simply does not work. We have to delete our entire property because we made a mistake with a part of the garden. Super annoying! There they go… 2h of work.

Each section of the garden needs a “starting point” where the boundary is redrawn. The problem is that this starting point must not be on a slope. The moment you start mapping, the Navimow just rolls away. A bug I suspect. The motors spinn “free” and the unit goes down the slope. So the “starting point” must necessarily be on a flat surface!

In general, the robot does not seem to know the difference between Pause and Stop. Pause also de-energizes the motors and the device rolls down the slope.

Stop, on the other hand, leaves it in place.

When the Navimow loses its signal, it takes quite a long time to find it again. Then it goes back to the charging station every time and only then continues its mowing routine. This is annoying but probably due to the technology that he gets his home fix.

Unfortunately, I cannot have partial sections mowed. I can’t send the machine to the “main” garden. It always mows the entire area. Segmentation is apparently not yet provided. So no “Monday the front yard” and “Tuesday the “back yard”.

This is super stupid in my case because the car parking lot is also on a meadow and of course I want to take out this part when the car is there. The robot reacts quite stupidly to obstacles and would simply drive against the car. Because his bumper is very deep and also sensitive only in 5cm above the ground. So he would quickly scratch the paint. Please fix the Segway and allow me to treat individual areas separately.

The “Blade Halt” setting should actually detect a stuck mower, but as soon as this mode is on, the unit doesn’t want to mow at all, but just runs the mowing distance without the mower motor starting. Probably a bug.

In mowing mode, the mower seems to be constantly raising and lowering its mower blades when it is done with a section. This certainly doesn’t need to be the case and I wonder why?

The device just shines extremely bright at night and I can’t turn the light off. Currently, I just plug the device out at night. In the future, a shelly plug will have to do it for me. I am annoyed that the device has no standby where it is simply off when it has nothing to do. The Navimow shines my neighbors and my eyes out at night, so bright is the light of the mower, the base station and the antenna also shines…

Conclusion after one day

Don’t worry if you haven’t managed to get hold of a device yet and are only on the delivery list for 2023. You are currently beta tester. Save yourself this phase rather and look forward to a hopefully well-hardened product in 2023. I have already written certainly 3 mails to Segway and have reported far from all anomalies. I find it super unfortunate that the official “beta test” that ran until recently has not fixed all these anomalies and I’m sure that in the running operation with me still quite other things will appear. I’m surprised that all the testimonials on Youtube have hardly written / said anything about the errors.

However, it remains to say that the device is quite accurate. When it runs the edges of the mowing areas, the repeatability is very high, and the volume of the wheels and the mower is really pleasantly quiet.

I think in a few weeks there will be a small update.

So, a few readings have come together and I still see some room for improvement as far as the energy hunger of the robotic lawnmower is concerned.

The energy curve shows the charge after docking, the drop of the charge curve at 80% battery and the slow drop down to 20W at full battery – trickle charge.

Everything is OK for me so far, except for the enormous energy consumption of 20W for “standby”. 20W means 70€ electricity costs per year just for the fact that the robot is in the charging tray and only waiting to be woken up by the app. This is too much and will hopefully be fixed.

“But then just disconnect the mower from the power”.

The robot does not go into a sleep mode. It searches for its base station, blinks, and sucks its battery dry within a few hours.

No solution but supposedly Segway is working on a “Night Mode”. I’m afraid that the update will only turn off the light and not change the activity behavior, but let’s wait and see.

Here’s something else that stands out: the battery does not charge constantly with 80W, but the charging power drops to 20W every few seconds. What is that? I can not explain this yet.