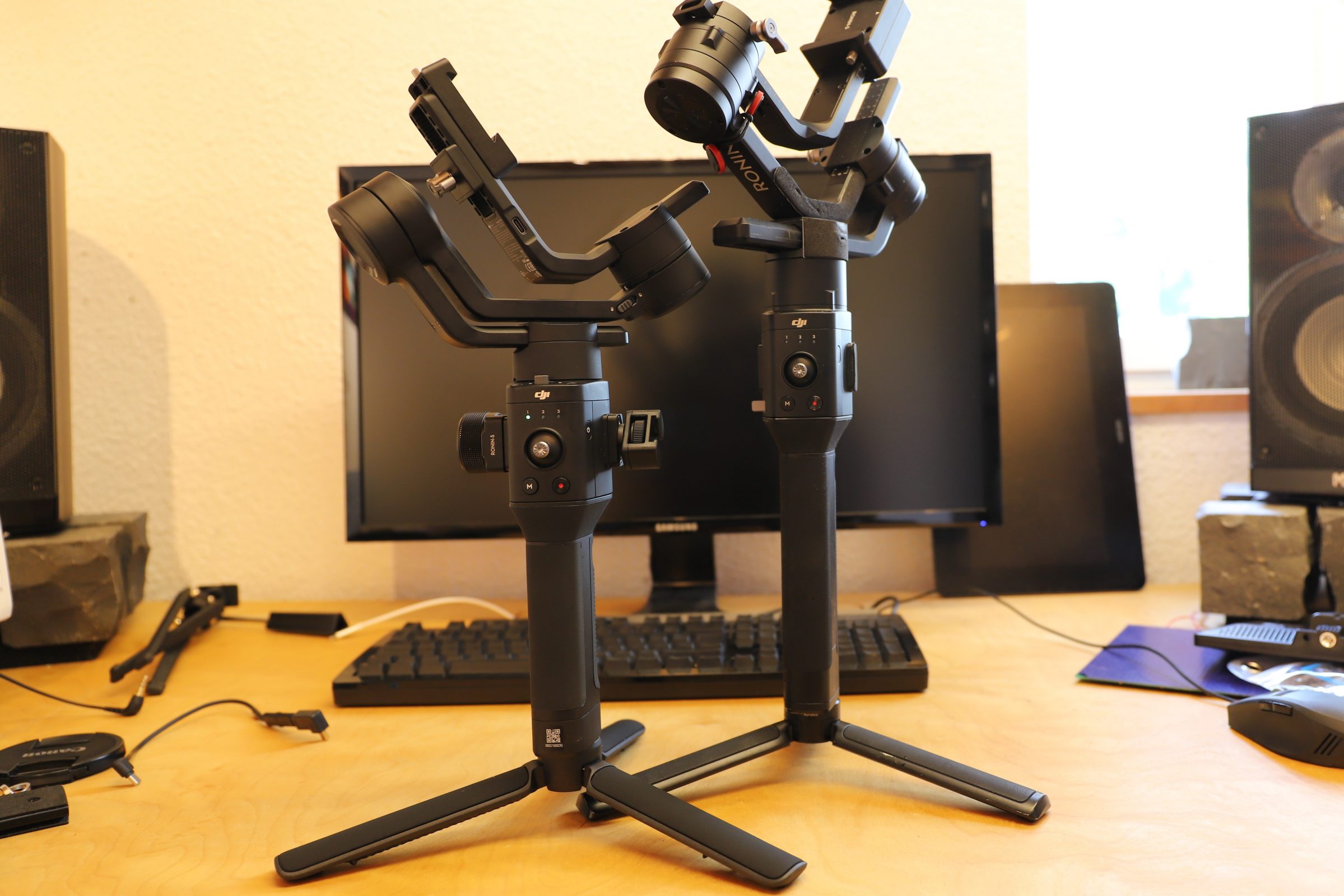 I held the DJI Ronin S in my hand at the DJI flagship store in Shenzhen on release day in China and wanted to buy it right there and take it with me. But unfortunately at that time only a pre-order was possible. Back in Germany I had to wait 4 months for my device until it was finally there. So big was the demand at that time.

In the meantime the Ronin S accompanied me to Japan, Czech Republic, Great Britain and the Netherlands and served me well.

Unfortunately the Ronin S with its 2.3kg was my heaviest utensil and therefore an enormous burden on journeys.

One year later, this time without much attention DJI introduced the Ronin SC and I ordered it without much thought and less than 3 days later it was already there. The main argument: The low weight of 1.1kg!

How’s the new little Gimbal holding up to his big brother?

What you notice at first glance is the choice of material. The Ronin S is mainly made of solid metal. DJI has given the new Ronin SC much more plastic. This makes it lighter on the one hand, but on the other hand a bit more unstable which you will notice.

I have to say that I operate the Ronin SC close to the load limit. It is actually intended for system cameras. I run it with a full-grown DSLR (Canon Eos 6D Mark II with a heavy Canon EF 24-70mm f/1:4L IS USM lens). Together they have 1.3kg with a maximum of 2kg allowed for the gimbal. It is clear that I am operating a device almost at its load limit. But the Ronin SC is mainly for mobile travel use and every gram counts.

The axles twist easily under the high weight and the base (which is now made of lighter plastic) allows the Ronin SC to sway slightly when you bump into it. Not bad at all if you hold it in your hand for filming. But I mostly use it standing up for timelapse shots and now it is a bit more susceptible to wind. I am thinking about using the stand of the Ronin S although it is a bit heavier. But the stability of the new plastic foot disturbs me slightly.

You can clearly see that the Ronin S has more power. If the gimbal is not 100% calibrated it forgives the user a lot before he starts complaining. The Ronin SC, on the other hand, needs to be calibrated very well so that it can cope with the high weight. But once it’s in the balance it also moves softly and very gently.

DJI has learned from many mistakes. The Ronin SC has axle locks, which make it pleasant to stow the gimbal easily again. Put the axle lock in, pack it away and just flip the switches again to get started. No ugly twisting of the axles in the backpack. Super! The carriage on which the camera can be moved now has an adjustable end stop, so you can find the set position faster. This saves a lot of time, as long as you don’t switch between several cameras.

But DJI could have gone a bit further. A slot screw is included to mount the camera on the carriage. Who the hell would take a screwdriver to film or photograph? DJI doesn’t even include a suitable tool for this. What is this?

I bought a quick-release screw for this. So I can change the camera at least tool-less by hand. It also fits inside the sled.

Sorry, DJI. Do you read in the DJI Forum at all?

The battery is much smaller and you can see that. I never had to recharge the Ronin S during my travels. The battery was simply a tireless monster. But that was also due to the situation that the Ronin S could serve as a power bank for the cameras or accessories. The Ronin SC, on the other hand, I got in my first tests within 1hour of usage from 100% to 75% down. This seems to make 4hours of usage. This might require more intermediate loading in the future. But he will make it through the day, so I don’t see a problem here, just a conspicuous thing.

The gimbal is smaller! Pros and cons at the same time. It is space-saving but my big Canon Eos 6D Mark II just fits into it. The eyecup touches the axis during the swivel. The lens must not be much heavier and bigger than my Canon EF 24-70mm f/1:4L IS USM. Just fine for me – just fine!

The Ronin SC comes with a holder for a smartphone. How I will use it outside of the Active Track mode is not yet clear to me because none of my cameras can get a smooth Live View via WLAN and therefore the screen of the camera is still indispensable.

The Active Track mode is a dream! The connected smartphone is simply strapped to the camera, connected to the Ronin SC and in the app an object is selected from the window to be tracked. The gimbal automatically follows even fast moving objects. You can move freely and the direction to the object is kept simple. Incredibly good (if you get the heavy smartphone calibrated on the Ronin SC) I can do it with my iPhone X, as long as I don’t move the camera too far back. From an inclination of about 45° to the rear the motors simply give up because the weight can no longer be held.

If you know that, and can cope with this limitation, you have a great new feature added. To be honest, the purchase was worth it for that alone. No fiddling with the joystick and several attempts until you get a clean pan. The gimbal simply swivels after the object.

My Canon Eos 6D Mark II is not officially supported by DJI for the Ronin SC. The rudimentary functions like triggering images or starting and stopping the video work fine with the included cable. Also the focus wheel, which I will take over from the Ronin S in any case, works exactly the same as with the Ronin S. Here you notice that most of the software comes from the Ronin S.

In short, a successful new product that personally replaces the Ronin S for me. The low weight, the just enough power and the successful new feature “Active Track” make me a lot of fun. It remains to be seen whether the device will withstand the strains of my upcoming travels.